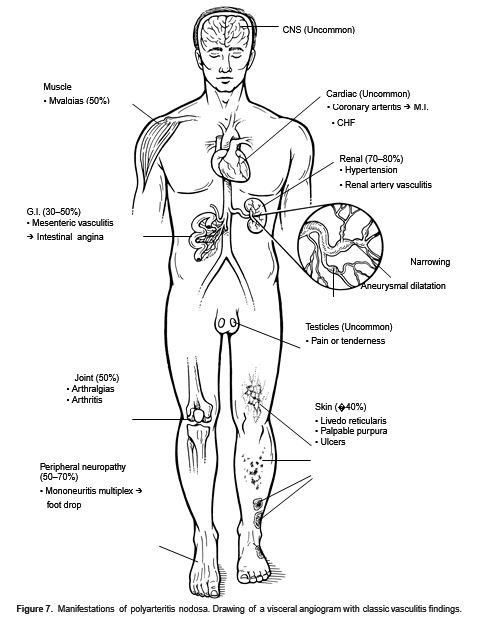 Figure 7. Manifestations of polyarteritis nodosa. Drawing of a visceralangiogram with classes vasculitis findings.

Definition: PAN is a systemic necrotizing vasculitis that affects medium and small muscular arteries of the skin, kidneys, muscle, GI tract, and peripheral nerves. Microscopic polyangiitis is also described because it is a PAN variant and affects smaller sized arteries. Microscopic polyangiitis is distinguished from PAN by manifesting pulmonary capillaritis, alveolar hemorrhage, and P- ANCA positivity.

Etiology: PAN is systemic vasculitis of uncertain etiology. Although there is no consistent infectious cause; PAN has been associated with hepatitis B antigenemia, especially in intravenous substance abusers. Hepatitis C has been described in both PAN and microscopic polyangiitis.

Demographics: PAN and microscopic polyangiitis are uncommon disorders. Median onset age is 40 to 60 years, with a 2:1 male predominance.

Diagnostic Testing: Nonspecific inflammatory markers include elevated ESR or CRP, leukocytosis, anemia of chronic disease, and thrombocytosis. In the setting of renal disease, an abnormal urinalysis with proteinuria, granular or red blood cell casts, and declining creatinine clearance is frequently seen. Hypocomplementemia (low C4, C3) and circulating immune complexes are inconsistently detected; the latter are not recommended because of their poor sensitivity and specificity. Evidence of HBV or HCV infection should be sought. An angiogram of the mesenteric or renal arteries may strongly suggest PAN if vascular tapering, microaneurysms, and beading are noted. A histologic diagnosis is made by biopsy of a medium-sized muscular artery. Biopsies are best performed in clinically involved tissues and may include a sural nerve (with foot drop or neuropathy), a muscle (with myopathy or myalgia), or, less preferably, a symptomatic testicle. Renal biopsy is not helpful because specimens seldom exhibit characteristic abnormalities. Microscopic polyangiitis is associated with P-ANCA.

Keys to Diagnosis: PAN may be a diagnostic challenge. Histopathologic evidence of medium-vessel vasculitis or a pathognomonic angiogram in the appropriate clinical setting confirms a clinical diagnosis.

Therapy: In PAN, high-dose corticosteroids are the first line of treatment and are generally begun with at least 1 mg/kg in divided doses. Addition of such cytotoxic agents as cyclophosphamide and less commonly azathioprine is often justified, both for steroid sparing and for disease refractory to steroids alone. Some studies suggest improved survival with the use of cyclophosphamide. MTX has not been studied. Although trials are in progress, TNF inhibitors (infliximab, etanercept) have nonetheless been used with success in some patients with refractory PAN and granulomatosis with polyangiitis. The aggressiveness of therapy is based on the tempo of the disease and the extent of visceral involvement. Addition of plasma exchange to the therapeutic regimen is not of proven benefit. Antiviral therapy with interferon alpha should be considered in patients with PAN with evidence of active HBV infections. The benign course of limited cutaneous PAN supports conservative therapy for this variant.

Prognosis: PAN is associated with very high morbidity and substantial mortality. Untreated, mortality is >90%, but with corticosteroids, it decreases to 50%. The survival advantages of cytotoxic therapy are controversial. Most mortality is owing to renal failure, GI perforation/hemorrhage, and cardiac involvement. Patients who survive the initial manifestations of PAN are at high risk of infectious complications because of the potent immunosuppressive therapy necessary to control the disease. Chronic cardiac and/or renal disease are other long-term sequelae.