Definition: Entering the hand, the median nerve and the flexor tendons pass through the carpal tunnel within the wrist. The carpal tunnel is formed on the bottom by the volar surface of the carpal bones of the wrist and on top by the transverse carpal ligament (flexor retinaculum), which encloses the tunnel (Fig.1). CTS is a constellation of symptoms that result from the compression of structures within this restricted space. In most cases, symptoms result from compression of the median nerve, which innervates the thenar muscles, the lumbricales on the radial side of the hand, and the skin overlying the radial side of the palm and the first, second, third, and radial side of the fourth digits.

Risk Factors: A number of conditions may be associated with development of this condition (Table 8). Among the most important may be overuse or repetitive stress injury, although this is somewhat controversial. Nevertheless, in some series, more than half of the patients evaluated were considered to have CTS of occupational origin. It has been estimated that one in 10 office workers may develop CTS (presumably from computer overuse).

Demographics: CTS is the most common entrapment neuropathy, with a prevalence of approximately 250 to 500 cases per 100,000 population. It may affect as many as two million Americans every year.

Cardinal Findings: Early in CTS, patients may complain only of paresthesia or numbness of the fingers or hand rather than frank pain. These symptoms may be accentuated at night and may be relieved by shaking the hand. Symptoms are more common in the dominant hand but may be bilateral. As the condition progresses, patients may report more severe pain in the distribution of the median nerve that may be exacerbated by particular movements. Some patients may relate sensations of pain or numbness in areas that anatomically should not be affected (e.g., proximal to the wrist). As CTS becomes more chronic, frank muscle weakness, muscle atrophy (e.g., thenar muscle atrophy), and hypesthesia may develop. Tinel’s sign or Phalen’s sign is sometimes used to aid in the diagnosis of CTS (see Evaluation of Musculoskeletal Complaints, Table 7). Tinel’s sign is positive if repetitive tapping over the flexor retinaculum and medial nerve at the wrist (with the hand in slight dorsiflexion) elicits numbness, dysesthesia, or electric-like sensations in the first 3-1/2  fingers. The Phalen test is positive if symptoms are elicited when the patient holds the dorsal surfaces (or backs) of the hands against each other with the wrists in forced flexion. Unfortunately, in several large research series, the sensitivity and specificity of these tests for diagnosing CTS were nearly 50%. Thus, a positive or negative result must be interpreted within the context of the clinical suspicion. 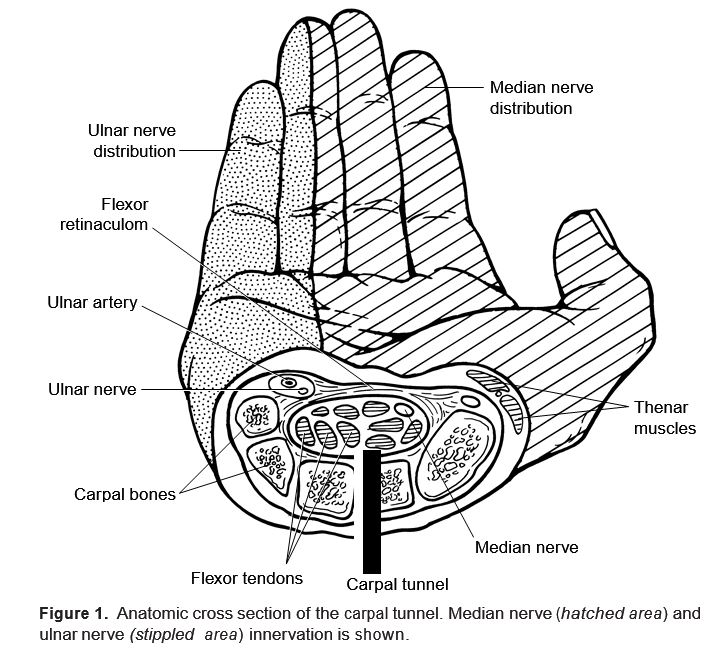 Diagnostic Tests: Because the pathophysiology relates to entrapment and impaired function of the median nerve, electrodiagnostic tests may be considered the gold standard for diagnosis of this disorder. Thus, nerve conduction velocity testing would be expected to reveal findings such as prolonged distal nerve latency conduction times. In experienced hands, these tests may have a sensitivity of 90% and a specificity of 60%. The findings present on nerve conduction velocity vary with the extent of involvement and may progress over time. Laboratory studies may aid in the diagnosis of associated conditions (Table 8), and tests should be chosen based on clinical presentation. Imaging studies are of little value in evaluating CTS.

Keys to Diagnosis: CTS should be strongly considered in any individual who presents with numbness or pain in the hand. Because it is so prevalent, many patients may be expected to have atypical presentations. A clinical history of pain or numbness affecting the hand in the distribution of the median nerve and pain or weakness of the thenar muscles (e.g., in flexing or opposing the thumb) should arouse clinical suspicion of CTS. Patients demonstrating classic symptoms and signs need not undergo further electrodiagnostic testing.

Differential Diagnosis: A variety of less common conditions may present with wrist or hand pain and be confused with CTS. Early, mild synovitis of the wrist, for example, with RA or crystalline arthritis, may mimic CTS. Likewise, ganglion cysts of the volar aspect of the wrist or bony osteophytes of the carpal bones may cause wrist pain. As noted above, all these conditions may also be associated with true CTS, which may make a determination of the exact cause of pain more difficult. Entrapment of the median nerve at another location or cervical radiculopathy may mimic CTS, but these are uncommon. Patients with ulnar or radial nerve entrapment may also report similar complaints. Ulnar nerve entrapment may produce pain, numbness, or clumsiness of the fourth and fifth fingers, hypothenar atrophy, or “clawing” of fourth and fifth digits. Radial nerve palsy may result in wrist drop, with flexion of the metacarpophalangeal joints and numbness of the thumb, index, and middle fingers.

Therapy: Treatment of CTS begins with avoiding overuse and splinting the wrist and hand in a neutral position (in slight extension). Nighttime splinting of the affected wrist(s) may suffice. Most physicians add an NSAID if there are no contraindications and wrist inflammation or arthritis exists. For those unresponsive to conservative maneuvers, local injection with a corticosteroid may be used. Although steroid injections are often successful in the short term, many patients have recurrent symptoms.

A large number of cases arise from repetitive overuse at the workplace. Thus, correct ergonomics may be important in preventing CTS. For example, it is recommended that those who type at computer terminals for long periods of time sit with the back straight, feet flat on the floor, forearms parallel to the floor, and wrists “floating” (i.e., not resting continually on anything). In addition, it is important to take breaks every so often to stretch and rest the arms and hands.

Surgery: Surgical decompression of the carpal tunnel may be indicated when conservative measures fail or when there is evidence of persistent sensory loss or thenar atrophy. Surgical release of the transverse carpal ligament may relieve the compression on the nerve. Symptoms may recur after surgery. Although carpal tunnel release is usually an outpatient, open surgical procedure, newer techniques are being evaluated (e.g., arthroscopic decompression, balloon dilatation of the carpal tunnel, and laser stimulation of the affected nerve). The comparative efficacy and risks of these newer techniques remain to be determined.